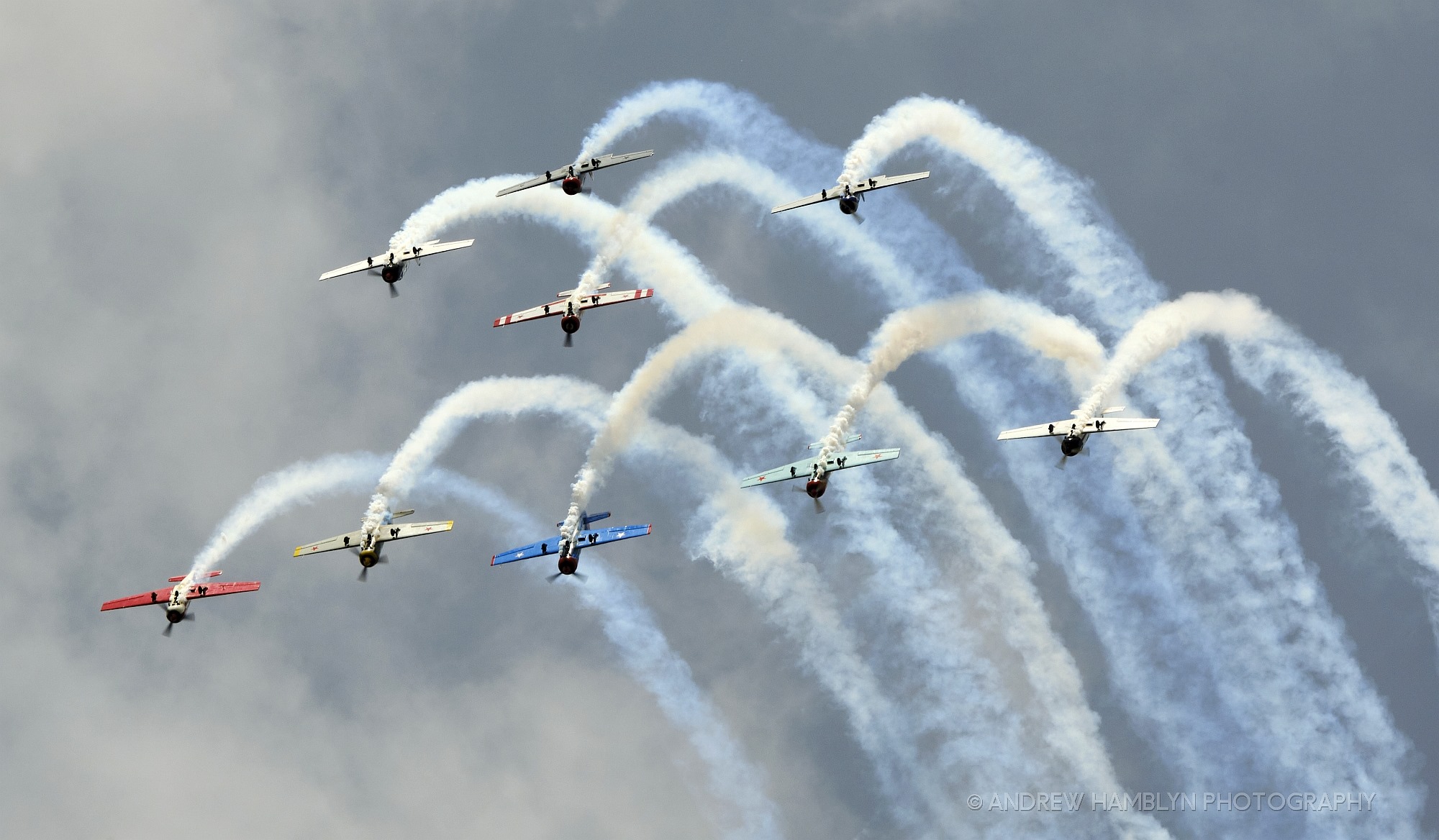 The Yak-52 team was originally formed in the early 1980’s with two Yak-52’s doing displays at small air events.  This grew to four as more Yak-52’s came into the country.  The team currently comprises of nine aircraft; their signature move a nine-ship formation loop!

Less than half of the team are ex-military pilots with formation flying experience so it shows that most any civilian pilot can get up to the same level with the right training.

Doug's aviation experience was gained firstly in East Africa where he flew various aircraft across many of the countries there delivering food, aid and medicine to remote towns and villages. He now is an Air NZ Boeing 787 Captain based in Auckland flying long haul routes. Doug flies his own Yak-52 and has been the team leader for the past 5 seasons. Doug is a current B Cat instructor and NZ Warbirds supervising instructor for formation and low level aerobatic display approvals.

Mark started flying at age 16 at the Napier Aero Club in 1976 and gained his PPL at age 17. He joined the RNZAF in 1978 where he flew the DH104 Devon, BAC Strikemaster and A4 Skyhawk. In 1985 he joined Air NZ and is currently a Boeing 787 Captain. Mark has been with the team since 2007 and normally flys the grey Yak with the red nose and tail which is owned by the NZ Warbirds Association, of which he is the Operations Manager. He has accumulated over 23,000 flying hours in his 45 year flying career.

Kevin initially hailed from Stratford where he got interested in Yak flying and formation aerobatics after seeing two Yaks flown by Paul Hughan and Bryan Coppersmith dancing around the sky in the early 1980’s and became one of the founding members. Kevin is a business owner and now lives in Masterton. Kevin flys his own green and yellow Yak (ZK-KEV) and is an example that pilots of any licence and experience level can successfully become a good formation aerobatic pilot.

Bryan (BJ) started his flying in the RNZAF and is a former Strikemaster and Skyhawk jet pilot before leaving in the early 1980’s. He has recently retired from Air NZ where he spent most of his career on international routes flying the 767, 747 and 777 aircraft. BJ is a founding team member flies the yellow and red Thames based Yak-52 (ZK-YNZ). He and Paul Hughan were the driving force behind the initial four ship team and he has had a hand in training most of the current members at some stage.

Huggy as he is known in the aviation fraternity, joined the RNZAF in 1982 as a University Officer Cadet graduating with a Bachelor of Physics prior to beginning his pilot’s course. He flew Strikemaster and Skyhawk jets and became an instructor in 1990 for CT-4B Airtrainer. He joined Air NZ in 1998 and currently flies the Boeing 787. Paul is a current B & D Cat instructor and is actively involved in NZ Warbirds as a supervising instructor for issuing type ratings, instructing in formation, formation aerobatics, low level aerobatics and display flying. He also flies various WW1 aircraft for The Vintage Aviator Ltd at Masterton.

Brett is a well-known Taranaki flying entity who started gliding at age 15 in 1974. He soloed at 16 and has over 35 years’ experience as a commercial fixed wing and helicopter pilot. He owns a successful Agricultural helicopter and ground fertiliser spreading business that operates throughout New Zealand. Brett is a NZ Warbirds supervising instructor for low level aerobatics and formation training and has trained many pilots in formation aerobatics and display flying in both piston and jet aircraft.

Fay is Brett’s daughter and is carrying on the Emeny tradition flying the blue and white Yak registration ZK-YAK and has been flying Yak-52s for over 15 years and has recently worked her way up to qualifying as a display pilot. She also co-drives in jet sprint boat racing with her husband Sean. Fay is one of only two civil female formation pilots currently flying displays in NZ, the other being Liz Needham in the Harvard Roaring Forties team. Fay debuted with the team at the Masterton Airshow in February 2021.

Peter is a retired Petroleum Engineer and lives in New Plymouth. He is a current PPL which he gained in 1971 and has multi engine and single pilot IFR ratings and over 2500 flying hours. He flies his own Yak, coloured black and white (ZK-PTE) and also owns and displays a T28 Trojan and an Aero Vodochody L39 Albatross. Pete is also a pilot for the Catalina syndicate. Peter demonstrates that pilots of any experience level can become a great formation aerobatic display pilot.

Mike started flying at the New Plymouth Aero Club in 1986 and in 1994 joined Air Nelson where he finished up as a Bombadier Q300 Captain. In 2016 he transferred across to Air NZ initially flying the B777 on long-haul routes before also transferring recently to the B787. Mike normally flies another grey camouflaged Yak-52 with the registration 718 which is owned by a syndicate based in Tauranga. Mike is a current B Cat instructor, a NZ Warbirds supervising instructor, and has also recently opened a flying school at New Plymouth called Flightech.

So cool to see such an eclectic mix of projects ...

It is with sadness that we learn of the passing of...

#repost A selection of photos from our recent ...

A brief selection of the high octane action from ...

A flash back to a few years ago where this ...

By using New Zealand Warbirds Association Inc, you accept our use of cookies.
OK